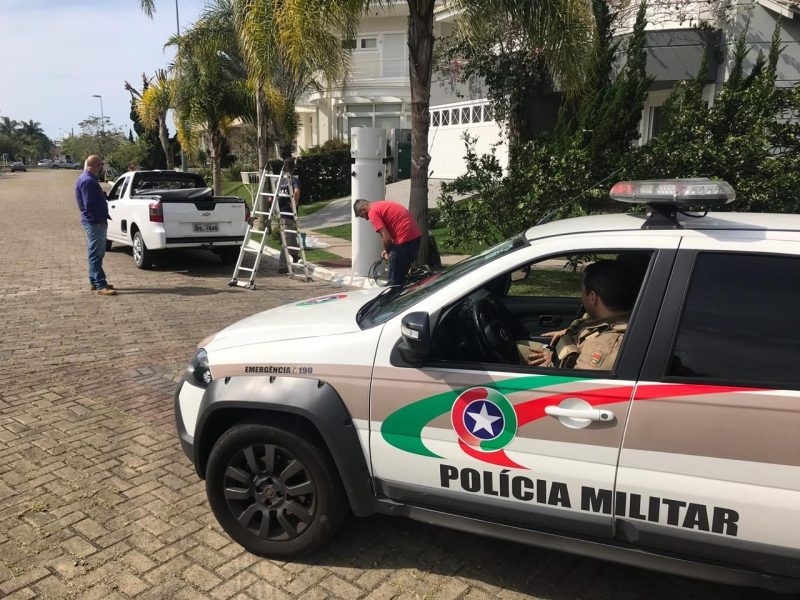 Image: Military Police follows the installation of the totem pole in the north of the island of Florianopolis* - Photo: Urbanii / Divulgação / ND

Additional cities are being added to the 3dEYEcloud video surveillance platform across Brazil as the community safety project that started in Penha, Santa Catarina has been proven successful.

In this new exciting development, 3dEYE, along side with its Brazilian integrator partner Urbanii, are expanding the cloud video monitoring platform in the state of Santa Catarina. “There are totem poles with cameras in Penha, Joinville, Piçarras [in the process of being installed], Navegantes and São José”, comments Rubem Henrique, CEO of Urbanii.

The quoted article below explains how the new totem poles appearing in Florianópolis work. Originally published by Noticias de Santa Catarina (ND) on the 25th of November, 2019, https://ndmais.com.br/noticias/totens-que-apareceram-em-florianopolis-entenda-o-que-sao-e-como-funcionam/

Structures with the PM logo (Policia Militar) caused curiosity in the north of the island; cameras record license plates and people's faces

According to the CEO of Urbanii Tecnologia (the company that makes the totems) Rubem Henrique, the company has an urban community program that is provided for the neighbourhood residents’ associations. The main goal is the preservation of public spaces.

“I sign an agreement with these associations, deliver the technologies, applications, platform and a set of solutions. The association agrees to support and publicise our sponsors in return,” explains Henrique.

According to Henrique, the goal of implementing the program is to transform the neighbourhood into a kind of "condominium", but "without charge". In addition to the residents, neighbourhood merchants also participate in this process.

The active totem poles in Florianópolis

Today there are three totem poles in Florianópolis. One is in front of a supermarket on the Maurício Sirotsky Sobrinho highway, in Jurerê, another - in Alameda César Nascimento, also in Jurerê, and a third in Robaletes street, in Jurerê Internacional.

The traditional Jurerê were installed by Adecom (Jurerê Community Development Association). The main reason was to maintain peace and quiet as there were many reported disturbances in the area. According to Henrique, the goal is that Jurerê installs 42 totem poles.

New totems in the city

A new totem pole should be installed soon in the João Paulo neighborhood, by Ampsol (Por do Sol II Residents Association).

It is also expected that five structures will be placed on Avenida Beira-Mar Norte, three on Morro das Pedras, in the south of the island, and one in the centre of the Ingleses neighbourhood, with support from local businesses. The forecast is that by January 2020 the project is completed.

For the totems to have cameras, according to Urbanii’s CEO, there is an agreement with the State Department of Public Security. The cameras record license plates of cars entering the neighbourhood, as well as people's faces.

According to Major Ricardo Sartori, at the beginning of 2018, at the time of the change of government from Raimundo Colombo to Eduardo Moreira, a public campaign was launched to disclose and receive partners for image sharing. Urbanii entered as one of the partners, signed the contract and started to operate. “It's like a bidding, but at no cost,” explains the major.

The projects also allows local business to monitor cameras. That is, associations and affiliated merchants can view the images of particular cameras through the 3dEYE platform. This does not apply to the totems which images are exclusive to the police.

How do totems work?

A totem equipment cost is estimated at $25,000. The company's sponsor group pays for the equipment and displays their brand on the device and app. After the equipment is ready, it is delivered to the residents' association, they are installed and the internet and energy costs are borne by the association itself.

The images from the totem cameras are directed to the 21st Military Police Battalion, in the north of the island, which performs 24/7 monitoring.